Espot is one of the best villages to start from when doing the ‘Carros de Foc’* tour of nine refugios in the Aiguestortes National Park. Unfortunately, it is not served by a direct bus service from Barcelona and our small group: myself, Kevin and Ken, were dropped by side of the road leading up to Espot with instructions to be on the opposite side at 2pm the following Tuesday for a pick up after the tour. Faced with a 7km uphill walk on a hair-pin road in the mid-day sun we took the easy option and arranged a land rover taxi up to the village for a quick lunch before another land rover up to the start of the route and a walk to the first refugio.

There then followed what became a well-worn routine: book-in; listen to the rules; overnight kit into a plastic box; shower and a beer before the evening meal. Usually four courses, this provided the opportunity to chat with others on the same route. We found no other British groups on the tour but it was surprisingly popular with groups from Israel.

Dorms varied from large to very large and there was certainly no need for anything more than a sheet sleeping bag with 30+ bodies chucking out heat and windows invariably firmly shut.

Breakfasts were varied. On good days a buffet was provided but on one occasion we were given little more than a single slice of bread, a triangle of processed cheese and an unspecified meat paste (apparently popular in Mallorca but rejected by the carnivores on this trip).

On the plus side, the trail was largely well marked and the scenery was always spectacular with lakes, impressive granite peaks and many streams. The weather was also kind with only one day requiring full waterproofs. Unfortunately, this coincided with the traverse of a very large boulder field and a couple of long snow patches but we made it to the hut in time to avoid being consigned to the third level of bunks.

To round off the tour off we were awoken at 5.00 am on the last day by a spectacular electrical storm outside the hut, the highest of the trip at 2400m. Fortunately, the rain eased after breakfast and we were able to lose the required 1000m+ of height to reach Espot and go on to join the crowds in Barcelona for a free day before returning home.

* ‘Aiguestortes’, apparently means rushing waters while ‘Carros de Foc’ means ‘Chariots of Fire’. We never found out why the tour has this name. 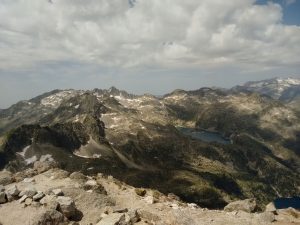 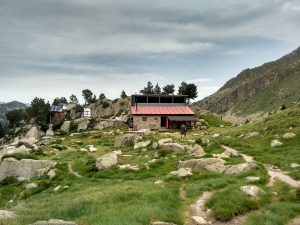 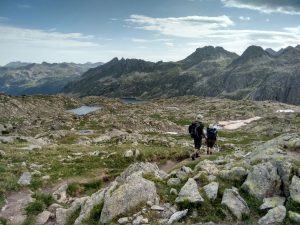 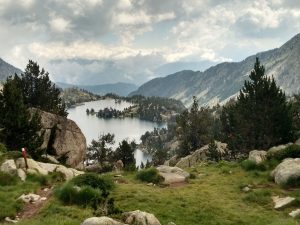 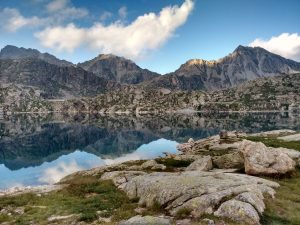 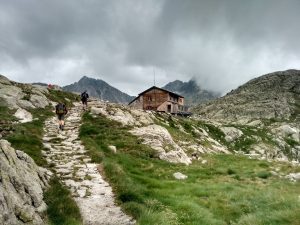 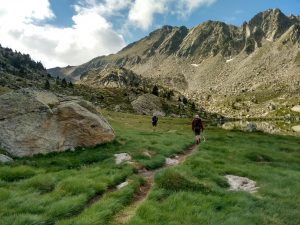 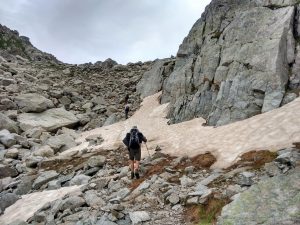 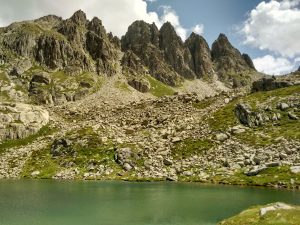 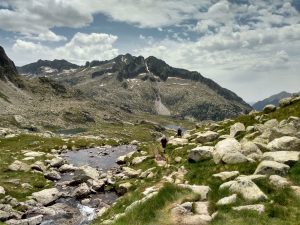